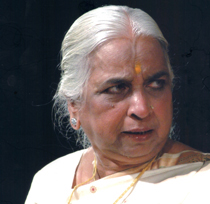 Girija Devi ( born,May 8, 1929) is an Indian classical singer of the Banaras gharana. She performs classical and light classical music and has helped elevate the profile of thumri.
Girija Devi was born in Varanasi,on May 8 1929 to Ramdeo Rai, a Bhumihar Brahmin zamindar. Her father played the harmonium and taught music, and had Devi take lessons in singing khyal and tappa from vocalist and sarangi player Sarju Prasad Misra starting at the age of five. She starred in the movie Yaad rahe aged nine and continued her studies under Sri Chand Misra in a variety of styles.
Devi made her public debut 1949 on All India Radio Allahabad, after getting married to a businessman circa 1946, but faced opposition from her mother and grandmother, because it was traditionally believed that no upper class woman should perform publicly. Devi agreed not to perform privately for others, but gave her first public concert in Bihar in 1951. She studied with Sri Chand Misra until he died in the early 1960s, worked as a faculty member of the ITC Sangeet Research Academy in Kolkata in the 1980s and of the Banaras Hindu University during the early 1990s, and taught several students to preserve her musical heritage.Devi often toured and continues to perform in 2009.
Devi sings in the Banaras gharana and performs the purabi ang thumri style typical of the tradition, whose status she helped elevate. Her repertoire includes the semi-classical genres kajri, chaiti, and holi and she sings khyal, Indian folk music, and tappa. The New Grove Dictionary of Music and Musicians states that her semi-classical singing combines her classical training with the regional characteristics of the songs of Bihar and eastern Uttar Pradesh. Devi is considered as "Queen Of Thumri" She is known to have been the teacher of the founder of The Alankar School of Music, Mrs. Mamta Bhargava whose Indian Classical music school has attracted students from hundreds of miles away. Devi was awarded the Padma Shri in 1972 and the Padma Bhushan in 1989, received the Sangeet Natak Akademi Award in 1977 and the Sangeet Natak Akademi Fellowship in 2010. Devi has received many more awards in which some are:
Padma Vibhushan Samman 2016
Maha Sangeet Samman Award (2012)
Sangeet Samman Award ( Dover Lane Music Conference)
GiMA Awards 2012 (Lifetime Achievement)
TanaRiri Puraskar 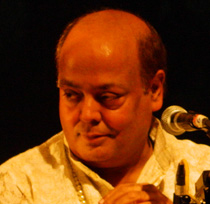 Sabir khan was born on the 4th of December 1959 in Rampur, U.P. As a child prodigy in a family of great musicians whose heritage goes back to the 11th century A.D of “MIR AKASA” lineage.
Sabir is the youngest amongst the renowned tabla players of our country, and at an age of 52 his incredible dexterity, richness, superb tonal quality and maturity surprise any listener or connoisseur of music of the same time. Father, late Ustad Karamatullah Khan Sahab and his grandfather, late Ustad Masit Khan Sahab were the celebrated tabla maestros of their times.
Sabir khan is the only living heir and the sole representative of the famous “Farukkhabad Gharana” which was confounded by Late Haji Ustad Vilayat Ali Khan Sahab, his son late Ustad Nessar Khan, who produced the student like Ustad Munir Khan, his students late Ustad Ahmedjan Thirakwa Khan Sahab and late Ustad Amir Hussain Khan Sahab. Sabir is the 33rd descendent of his family in an unbroken lineage.
Sabir’s Grand father late Ustad Masit Khan was the unparallel Tabla Maestro of his time and practically performed with all the top musicians like late Ustad Fayyaz Khan Sahab, Ustad Hafiz Ali Khan, Ustad Enayat Hussain Khan, Ustad Wazir Khan, to name a few.
Sabir Khan received intensive rigorous TALIM from his grand father and later from his father. At the age of 9 his first remarkable performance was a unforgettable one, in which he gave his solo performance with late Ustad Karamatullah Khan, and late Ustad Masit Khan Sahab on 19 December 1968 at Banga Sanskriti {Calcutta} in front of ten thousand people. At that early age Sabir has accompanied practically all the top ranking celebrities of the time.
Sabir khan also earned wide reputation as a composer and Singer of ghazals and has rendered a vast number of Ghazals recitals all over India and in foreign countries i.e. Far East and U.K. He also received the title of Ghazal King and Composer in 1983 from (Djakarta Music Association Indonesia).
Sabir’s Recital; both as a soloist and as an accompanist was granted praiseworthy not only in India, but also in many countries aboard. He was invited to perform in countries, like Japan, France, UK, Holland, Germany, Belgium, Yugoslavia, U.S.A, USSR, China, Italy, Norway, Sweden, Thailand, Honkong, Singapore, Taiwan, Pakistan, Bangladesh, Indonesia, Sri Lanka and Middle East Countries.
H.M.V has released L.P Disc and cassette of ghazals composed and sung by Sabir khan and Aruna Kundanani.